Fresh cilantro becomes more and more common with the featured aroma for soup, noodle soups, pizzas, grilled, sauce, etc. It is also famous for its green cool color. However, there are some aspects about this coriander that take you a surprise. Long Produce will point out something you should know about fresh cilantro.

1. The origination and development

Cilantro is believed to be original from Southern Europe and Asia Minor. Beginning from the Early Ages, cilantro plants and seeds were traveled to Egypt, Southwestern Europe, and Eastern Asia through trade pathways. Cilantro was recorded in Egyptian documents as early as 2,500 BCE, while the seeds were found in Israeli caves that have existed for more than 8,000 years. On the other hand, in China, cilantro was found in agricultural documents in the 5th century and was also used by the Greek and Roman Empires as medicine and food. In the 16th century, the Spanish explorer brought this herb to the New World but until the 17th century, cilantro was widely known and cultivated by the British in the New World and rapidly became a primary plant in Latin America. Time over time, nowadays, cilantro appears all over the world in stores, supermarkets, groceries.

2. The taste and characteristics

Cilantro regularly includes tiny leaves stuck with long and thin green stems. The leaves change in size with the larger base and the smaller and more delicate top stems. Coming to color and shape, the leaves are in medium to dark green color while the shape is large, plain along with having feathery and serrated edges. Both leaves and stems are edible with a crispy and aromatic texture. The taste of cilantro is a combination of slight sweetness, pungent aroma, and slightly grassy.

Even what kinds the vegetables or herbs are, they still include particular nutrition values. Cilantro is not an exception. Below are the stats in a cup of fresh cilantro (around 16 grams)

Beyond these basic values, cilantro also includes several staple nutrients such as:

Even though it needs more research to make it clearer, some studies have pointed out the link between fresh cilantro by decreasing the symptoms of cognitive diseases such as Alzheimer’s and Parkinson’s. More specifically, a study has reported that fresh cilantro decreased seizure attacks as well as blocked nerve-cell damage in rats. While in another one, scientists added fresh cilantro leaves to the diet of laboratory mice, the result show that the mice’s memory had been improved. However, as mentioned before, there are more needed studies on humans to claim the statements.

Fresh cilantro is famous for its ability to reduce blood sugar. Therefore, those who are in low blood sugar levels or taking diabetes medications should be careful or ask the doctor before using them. In an aminal test, cilantro seeds lower the levels of blood sugar by activating an enzyme that eliminates sugar from the blood. In another study, cilantro extract reduced considerable blood sugar amounts in rats with high blood sugar or obesity. These impacts were the same as a blood sugar medication called glibenclamide. 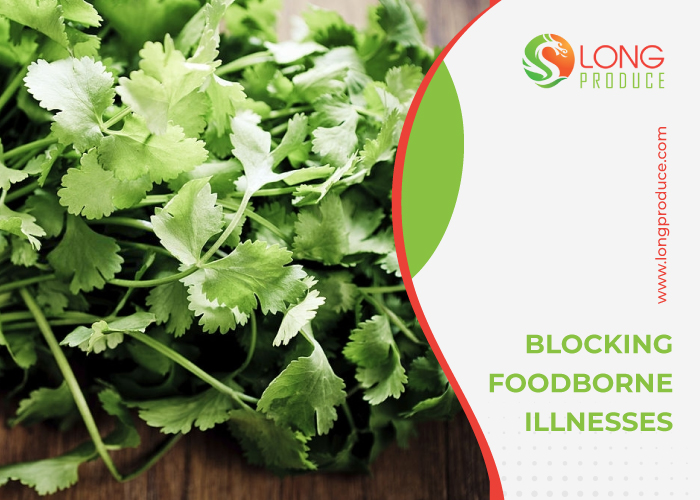 In cilantro, there is an antimicrobial compound called dodecenal. This compound has impacts on blocking the infection and illnesses caused by tainted food in the body. Dodecenal fights off against a microbe called Salmonella, which leads to dangerous issues, even threatening life. In a study, compounds in cilantro are useful against some bacteria even some are the reason for foodborne illnesses and hospital-acquired infections.

In 2015, there was a study in the Journal of Medicinal Food tested the ability of fresh cilantro extracts to keep the skin away from ultraviolet B (UVB) radiation damage. They examined an alcohol suspension of cilantro on both human skin cells in a dish and skin cells in hairless laboratory mice. The results showed the potential ability of these leaves about blocking or decreasing the sun damage on the skin.

Although fungal infections can be treated in different methods like thrush, they regularly lead to some unpleasant aspects. Hence, researchers are discovering several natural compounds that people can apply to manage fungal infections. In 2014, a test pointed out the impacts of essential oil extracted from the cilantro leaves on Candida albicans which is a yeast that is the main reason for infarction in humans. The claimer was the oil really has antifungal features but needs more studies.

Impressive effects on pain and inflammation

More and more evidence recommend the benefits of cilantro associated with reducing pain and inflammation. In a 2015 study, the result of an investigation on the ability of cilantro linked to decreasing pain has been proven clearly in rats. This said that the extract of cilantro seeds created a considerable analgesic impact.

Rapidly before applying fresh cilantro, wash it carefully to avoid dirt and grit. Pick off the leaves and remove the stems. Finely chop before using. You should not cook the leaves that can remove almost the flavor. If you are cooking pesto or sauce, you can blend both the stems and leaves in the processor. Below is a recipe with cilantro called peppered cilantro rice.

Methods you will make

In spite of just being the herbs,fresh cilantro is an indispensable ingredient with many people and dishes. Of course, besides the amazing taste, the benefits for the health of cilantro are undeniable. Enjoy the delicious meals with your family along with the special aroma of cilantro in your kitchen.